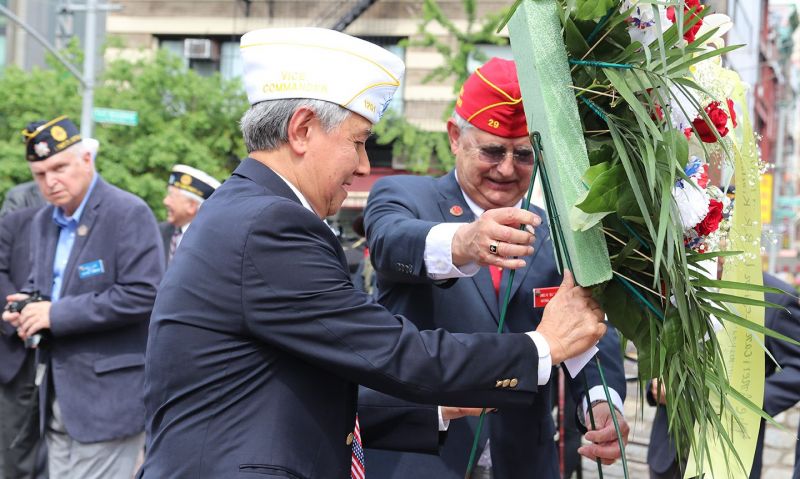 In the early 1960s, American Legion Lt. B.R. Kimlau Chinese Memorial Post 1291 wanted New York City to honor the Chinese Americans who’d served in the U.S. military. The post put its money where its mouth was, putting up the money to hire architect Poy G. Lee to design such a memorial and cover the cost of construction.

In 1962, the Kimlau War Memorial was dedicated in Chinatown’s Kimlau Square, one-third of a mile from Post 1291. The memorial, square and post all are named for Lt.  Benjamin Ralph Kimlau, a New York City Chinese American who served as a U.S. Army Air Force bomber pilot in World War II. On March 5, 1944, Kimlau’s bomber was attacked by Japanese forces and crashed near Los Negros Island, killing the entire crew.

The post gave the memorial to New York City, which eventually turned it over to the NYC Department of Parks and Recreation. The memorial is in need of repair, which may be on the way.

American Legion Past National Commander Fang Wong, a member of Post 1291, said the hearing is scheduled for June 1, and a decision could be determined as early as September.

“That’s pretty fast,” Wong said. “The post is putting a committee together to try to see what can we do or what should we do. Our post is working on the plan to provide witnesses and obtain other support (for the hearing). It sounds like the hearing will be a Zoom or virtual event.”

The nearly 19-feet-tall memorial honors Chinese Americans who died in U.S. military service during World War II. A granite arch, it features both traditional Chinese and modernist elements. It is inscribed in both Chinese and English with the words “In memory of Americans of Chinese Ancestry who lost their lives in the defense of freedom and democracy.” Benches sit on each side of the arch.

Wong said the consideration of the memorial for landmark status is “great news that just came out of the sky.” He also said it coincided perfectly with a visit from National Commander James W. “Bill” Oxford, who made a stop at the memorial for a wreath laying during visits to New York and New Jersey.

During a ceremony at the wreath laying, Oxford said he was “delighted” New York City is considering designating the Kimlau War Memorial as a landmark.

He also addressed an issue Wong felt was important: recent violence against Asian Americans. “The anti-Asian attacks that we have been seeing across the country have been absolutely deplorable. There is simply no acceptable explanation for it,” Oxford said. “When we discuss Asian Americans, it’s important to realize that the Asian description is an adjective, because they are 100-percent American. They are leaders in business, culture, academia, medicine, sports, public service and just about every profession that you can imagine.

“I share the dream of Martin Luther King Jr. that we start judging people by the content of their character rather than the color of their skin.”