Skip to content
Home » Lt. B. R. Kimlau Memorial on path to becomes a NYC Landmark

NYC may get its first landmark related to Chinese American history 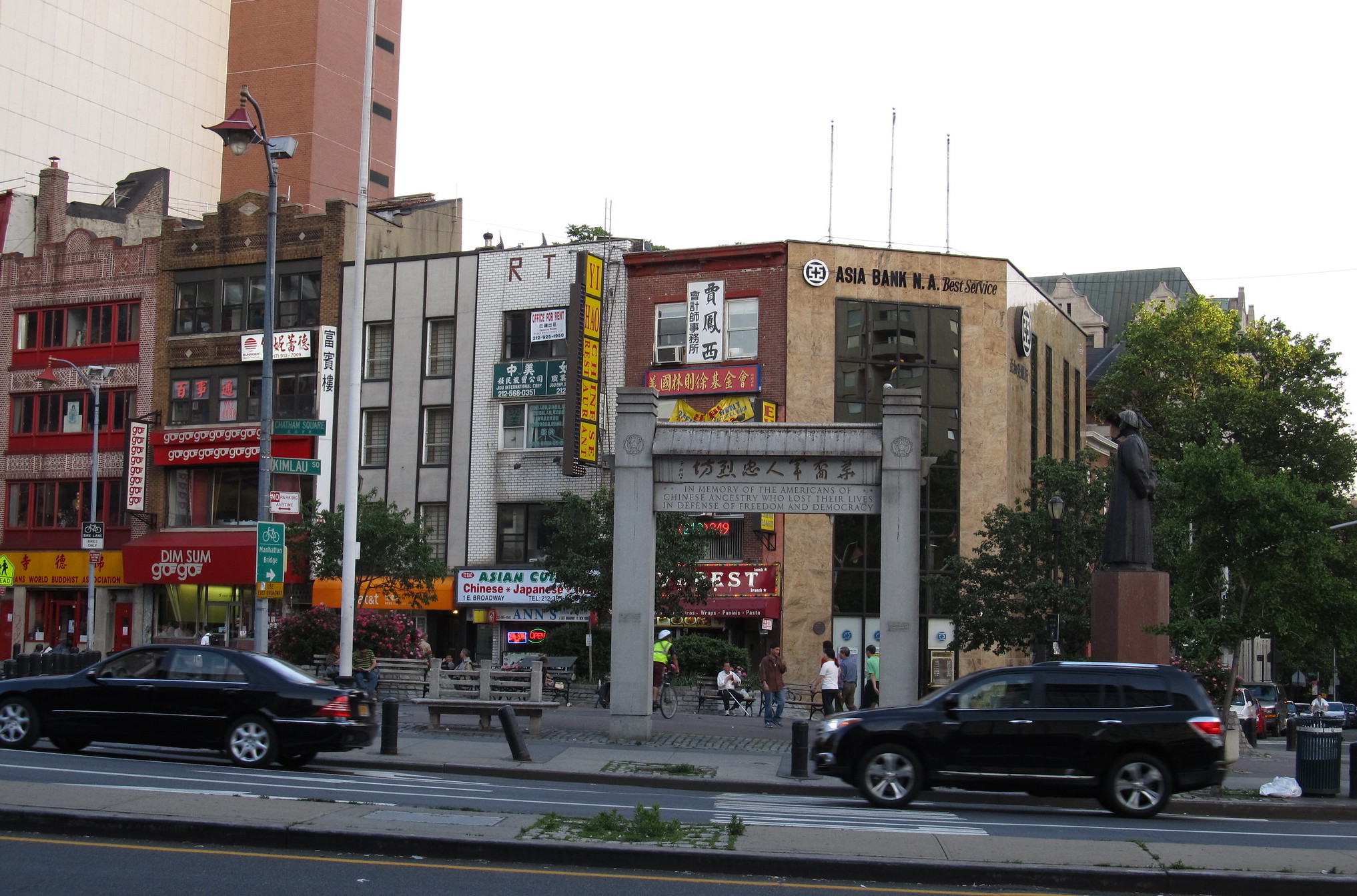 The Landmarks Preservation Commission on Tuesday voted to calendar the Kimlau War Memorial, a tribute to Chinese American veterans located in Chinatown. Designed by architect Poy G. Lee, the memorial honors Americans of Chinese descent who died during World War II. If designated by the city, the Kimlau War Memorial would be New York City’s first individual landmark that relates specifically to Chinese American history and culture.

The decision to consider landmarking the memorial comes as the country marks Asian American and Pacific Islander Heritage Month, and as the city continues to experience an uptick in anti-Asian hate crimes.

“I can’t think of a better time to consider a property that is significant to the Chinese community and I hope that action here would set the stage for considering more in the future,” LPC Chair Sarah Carroll said on Tuesday.

The memorial is located within Chatham Square, which was co-named Kimlau Square in 1961 in recognition of Lieutenant Benjamin Ralph Kimlau. Kimlau, a Chinese American from New York City, served as an Air Force bomber pilot in World War II and died in combat.

The American Legion, Lt. B.R. Kimlau Chinese Memorial Post 1291 was founded in 1945 by Chinese American veterans of World War II and named in honor of Kimlau. In the 1960s, American Legion asked the city to pay tribute to the Chinese Americans who served with a memorial dedicated to them. In 1961, Chatam Square was renamed and a year later, the Kimlau Memorial Arch was unveiled.

Designed by Lee, who was born on Mott Street in 1900 and later studied at the Pratt Institute, the Kimlau War Memorial was designed as a ceremonial gateway to Chinatown. The granite structure stands nearly 19 feet tall and features elements of traditional Chinese architecture and streamlined modernist design, according to Kate Lemos McHale, the director of research at LPC.

The monument, inscribed in both Chinese and English, reads: “In memory of Americans of Chinese Ancestry who lost their lives in the defense of freedom and democracy.”

Flanked by two benches, the site serves as a space for reflection and remembrance. It continues to serve as an annual site of celebration to honor war veterans and as a symbol of the contributions of Chinese Americans to the history of the United States.

“The arch and its two surrounding benches feature a streamlined interpretation of traditional Chinese architecture, with a peaked roof, interlocking brackets, and a symmetrical configuration,” reads a report from the LPC. “The arch itself is a typical Chinese architectural element that can be used both as a physical gateway or as a decorative symbol.”

While there are several significant landmarks in Chinatown, none are directly related to the history and culture of Chinese Americans. A public hearing on the designation of the Kimlau War Memorial will be scheduled in the coming weeks, followed by a public meeting and vote.

Click on the link to see the NYC Landmark Preservation Commission meeting, the meeting is 3 1/2 hour long but the Kimlau Memorial is the first item on the meeting for about 22 minutes.

Action: Propose for Commission’s Calendar, May 4, 2021

Designed by architect Poy G. Lee and dedicated in 1962, the Kimlau War Memorial is a granite ceremonial gateway located in Kimlau Square Park at the intersection of Chatham Square, Oliver Street, and East Broadway in Manhattan. The arch, sponsored by the Lieutenant B.R. Kimlau Chinese Memorial Post 1291 of the American Legion, honors Chinese American soldiers who died while serving in the United States military. The arch and its pair of benches consist of a unique blend of traditional Chinese architectural forms with a streamlined mid-century modern aesthetic and has stood as a community monument for nearly 60 years.

The memorial arch is named after Second Lieutenant Benjamin Ralph Kimlau (1918– 1944), a Chinese American pilot who died while attacking Japanese military installations in the South Pacific. Inscribed on the nearly 19-foot-high arch is a dedication in both English and Chinese to the memory of Chinese American war casualties. As part of Kimlau Square, the arch continues to serve as the site of an annual celebration to honor war veterans and remains an important tribute to Chinese American patriotism.

Born on Mott Street in 1900, Poy Gum Lee was a highly successful Chinese American architect who made a career designing buildings meant for the Chinese community. Lee was educated at Pratt, MIT, and Columbia, and worked as a draftsman in New York and Chicago in the early 1920s at architecture firms such as J.B. Snook & Sons and Murphy, McGill & Hamlin. In 1923, Lee was hired as a staff architect for the YMCA in China and spent the next two decades of his career in Shanghai designing institutional and commercial buildings that blended the newly popular Art Deco and International Styles with traditional Chinese vernacular forms. After World War II, Lee and his family returned to New York, where he became a senior architect for the New York City Housing Authority and also had his own architecture practice in Chinatown. In his private practice, Lee designed purpose- built structures for influential Chinese community organizations, as well as storefront     and façade alterations for small commercial clients.

The Kimlau War Memorial’s Chinese modern design reflects the diverse character of its location, situated between the oldest section of Chinatown near Mott, Pell, and Doyers streets dating to the late 19th century, and the stretch of East Broadway towards the Manhattan Bridge that has been a flourishing commercial corridor for the community since Chinese immigration increased in the 1970s. The arch and its two surrounding benches feature a streamlined interpretation of traditional Chinese architecture, with a peaked roof, interlocking brackets, and a symmetrical configuration. The arch itself is a typical Chinese architectural element that can be used both as a physical gateway or as a decorative symbol.

The arch and benches retain a high degree of integrity to their period of construction. Currently under the ownership of the New York City Parks Department, the Kimlau War Memorial is significant for its association with the architect Poy G. Lee, and for its importance as a monument dedicated to the contributions of Chinese American veterans.