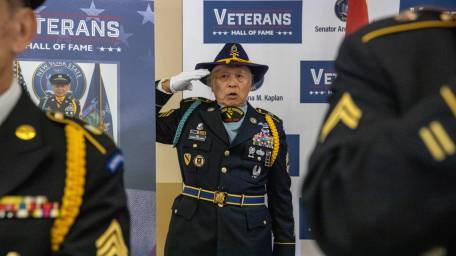 State senators and North Hempstead Town officials honored Master Sgt. Peter Gong on Friday for his longtime service in the military and dedication to the community, and inducted him into the New York Senate Veterans Hall of Fame.

State Sen. Anna Kaplan (D-Great Neck) nominated Gong, 78, of New Hyde Park, to the Hall of Fame based on his service in Vietnam, his service with the U.S. Army and Air Force reserves and honor guard, and his community work with the VFW and Chinese American civic groups.

“As a young man in the Army, Peter endured malaria, snakes, leeches and casual racism. While air jumping into rice paddies in Vietnam as an infantryman, his honor to duty and country was unwavering under 60 pounds of gear on his back,” Kaplan said.

Gong served more than a year in Vietnam more than 50 years ago, but he continued to serve for nearly 30 years in the armed services.

“In addition to his service in Vietnam, Peter has been an active and vocal member of local Chinese American civic groups and an outspoken advocate against hate and bias crimes,” Kaplan said.

As Gong was honored Friday, he paid tribute to his family of military veterans and bowed in Chinese tradition.

“I’ve been Asian all my life. Yes, I was picked on when I went into the service, and all through my life I’ve been fighting Asian hate and I’ve been standing up for our Asian rights,” he said.

Kaplan said Gong’s community work shows the need to elevate Asian American communities and fight back against hate crimes and xenophobia heightened during the COVID-19 pandemic.

“Since the outbreak of the pandemic, racism, xenophobia, and hate crimes against Asian Americans and people of Chinese descent specifically has exploded across our country and here in our own community,” Kaplan said. “We must highlight and celebrate our Chinese and Asian American heroes, like Peter.”

Gong was sent to Vietnam in 1965, fought three battles and served for 371 days there. He went on to serve in Korea, where he was awarded a medal made of melted barbed wire from the DMZ.

He tells friends and family he didn’t make friends in Vietnam because he didn’t know who was going to be there the next day, said Christine Liu, president of the Herricks Chinese Association of New Hyde Park.

After his 28 years in the armed forces, Gong served in color guards and the honor guard, where he served at 175 military funerals.

“He feels very lucky to return from war and owes it to the fallen soldiers. This is his way of honoring sacrifice of all soldiers and their families,” Liu said.