Gabe Mui Is Legionnaire of the Year 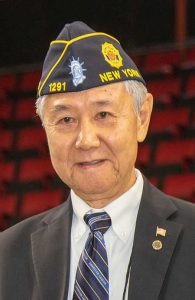 All ten districts submitted their Legionnaires of the Year for consideration, with First District’s Gabe Mui being selected as Department Legionnaire of the Year, Chairman Joseph Goonan announced at the 104th Annual Convention in Binghamton in July.

Mui served in the U.S. Army in the early 1970s and is a member of Lt. Kim Lau Chinese Memorial Post 1291 in New York County.

As adjutant he was instrumental in establishing a Business improvement District (BID) in the Post’s neighborhood, and was instrumental in setting up the Post’s computer system, launching electronic communication with members and the community. As commander, he led the Post in adopting a platoon in the 10th Mountain Division. After Superstorm Sandy, Mui helped coordinate efforts through the American Legion National Emergency Fund to assist legionnaires in rebuilding their homes and lives. He also was the driving force behind the last three editions of the Post’s journal that has been published every five years since the Post celebrated its 50th anniversary.

The other district Legionnaires of the Year are:

Gabe Mui – Legionnaire of the Year